Concerning the Austro-Soviet contract in general the following five units of each instrument had to be developed, tested an delivered:

General technical specifications for hardware to be used on board the space station MIR were pre-arranged with the Soviet partners. In particular, the specifications laid out the mechanical construction of the instruments and their packing up, the electrical and electromagnetic compatibility, the electrical assembly, the resistance against mechanical influence during transportation, climatic factors and ionizing radiation and the service reliability.

The acceptance, qualification and delivery of the instruments had to be carried out according to the following principle procedure:

The following approximatetime schedule for delivery of each unit to the Soviet was etablished and formed the basis for detailed time planning (T = date of mission start):

Tests at the Producers Premises

Appart from the so-called “technological training” and “technological operation test”, tests at the producers were mainly carried out following common standards valid for each producer. The producer himself was responsible for the test procedures and the documentation of the results. Among others, tests of single components, such as burn-in tests of electronic parts, life tests of mechanical parts etc., space qualification tests of modules, mechanical resonance investigations and functional tests of the instruments or subsystems under various operating conditions were performed. During the indispensable “technological training” the instrument was exposed to mechanical vibration in a frequency range between 25 and 30 Hz with an amplitude of 2 g stressing it in the most critical direction. The “technological operating test” was a running-test under operationg conditions. Its duration should not exceed 10% of the maximum permissable operation time of the instrument under normal climatic conditions. The aim of these tests was to find out manufactoring defects and to provoke initial failure. All functional units (TM, TrM, FM-1 und FM-2) had to undergo these specific test procedure. The corresponding test documentation had to be presented during acceptance tests.

Acceptance of each unit was carried out in two steps. The first step was the acceptance test in Austria (AT-1) in the presence of the instrument producers, the experiment investigators, the project management and Soviet experts. After the acceptance of a unit the project management took further responsibility for the instrument. The second step of acceptance tests (AT-2) took place in Moscow after transportation of the units to the Soviet Union. In the presence of the project management, Soviet experts and casually instrument producers or experiment investigators, the delivery of the units to the Soviet side was performed by signing the final acceptance documents which confirmed the suitability of the units for the specific purpose (e.g. cosmonaut training, integration tests, complex tests, use on board the space station MIR, etc.). The extent of acceptance investigations and the detailed test procedures for AT-1 and AT-2 were specified in special acceptance test programs, worked out for each instrument. In general the test programs included:

The space qualification of each single instrument type was tested by using a special technological unit (TM) which had to be completely equivalent to the finally used flight unit concerning construction and electrical input and output parameters. Following this test philosophy a premature impairment of the flight unit by stress conditions during the tests could be avoided. At the same time it was necessary to find out wheter any occuring instrument failure was confined to the technological unit only, or was due to a principal mistake in the design of the instrument type. All test procedures to be applied to a certain instrument were summarized in a qualification test program. The qualification tests were performed at the Federal Experiment and Research Institute Arsenal (BVFA) in Vienna, at Elin in Vienna, at the Institute of Applied Systems Technology of Joanneum Research in Graz and the Department of Communication and Wave Propagation of the Technical University in Graz. Because of the tight time schedule several tests had to be organized and carried out at the same time which required considerable logistic effort.

In order to simulate the extreme temperatures during instrument transportation from Graz to Baikonur via Moscow, temperature stress from +50°C to -50°C was imposed to the units in their transportation packing. The instruments were exposed to these temperature conditions for a period according to their gross mass. The units were taken out from the climatic cabin afterwords, exposed to normal conditions for a certain period and tested under normal conditions to verify their correct functioning. 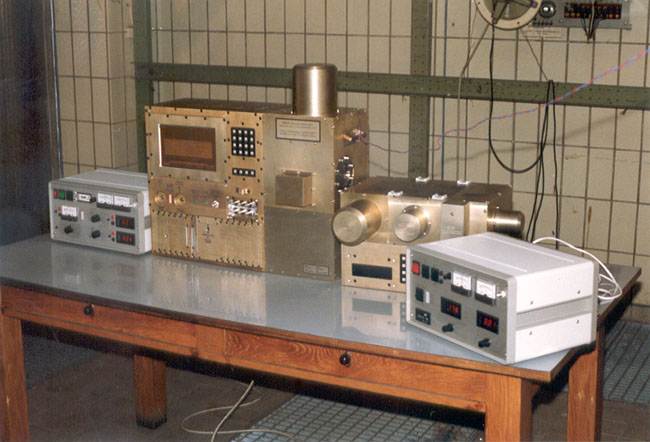 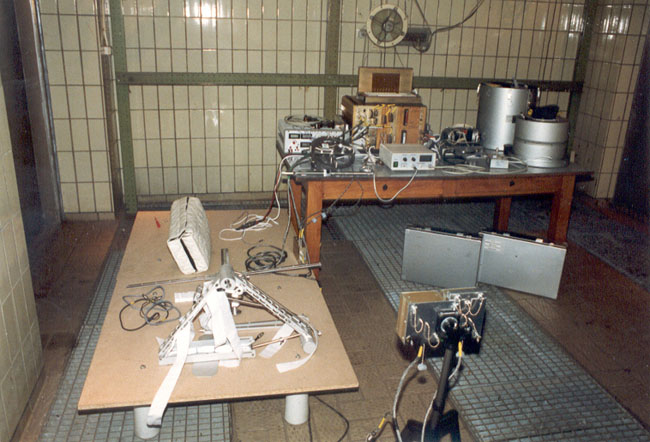 The resistance of the instruments against mechanical shock during ground transportation was tested by exposing them to semisinusodial concussions with an acceleration amplitude of 9 g and a duration of 5 – 10 ms. The instruments in their transportation packing were tightly attached to a vibration test block. 2500 of these shocks with a frequency of 1 Hz were imposed to the units in vertical, 1750 in longitudinal and 750 in lateral directions. Then the instruments were taken from the test block and their mechanical integrity and correct function was tested.

Mechanical stress conditions during the space flight were devided into 3 phases: Stress during rocket start and docking (phase A), during operation on board the space station (phase B) and stress caused by landing (phase C). All stress investigations were performed in three space-axes. After each test the mechanical integrity and correct function of the instruments were checked.

The scientific instruments were connected to the electrical system of the space station MIR during the flight. Therefore limits of tolerable parasitic voltage, produced by the instruments on the one hand, and robustness of the instruments against interference on the other hand were fixed by the Soviet side.

In order to provide standardized measurements a balancing network of the energy supply system on board based on resistive, inductive and capacitive parameters of the station supply network to which each instrument was attached had to be designed. The frequency-selective tests were performed in a shielded cabin. In order to investigate the robustness of the instruments against interference a special generator was developed being able to supply the instruments with DC voltage superimposed by sinusodial interference voltage with variable frequency and amplitude, pulses with variable amplitude, width and slope and voltage steps of variable amplitude and frequency. In order to avoid instrument damage by overvoltage, the test supply voltage was adjusted first using loads equivalent to the respektive instruments. Having set the correct voltage parameters the simulation loads were exchanged by the instruments themselves and the correct instrument operation was checked. In order to accelerate the comprehensive test procedure and to improve the precision of voltage adjustment a computer aided test control system was designed.

A high acoustic noise level is a severe danger on health. In order to make work on board the space station MIR bearable, the noise limit for an instrument in operation was set to 60dB in a distance of one meter. All instruments containing moving mechanical parts were tested frequency-selectively in a sound studio.

The reliability of the instruments for a guaranteed operation time of 300 hours was proved by an endurance test under normal conditions lasting for 483 hours.

Flight hardware for use in manned space stations have to fulfill special criteria concerning material selection. Especially non-metallic materials represent sources of toxic outgassing. This is why their use has to be carefully considered taking into account their mass and operation temperature. Since the Soviet side could not present reference lists for the selection of materials produced in Western Europe and did not accept ESA guidelines, it was decided to treat this problem in a three-step procedure. In the first step a reference list was elaborated for each instrument containing information about the type, the mass, the operation temperature and, as far as possible, the expectable outgassing products of the used materials. These reference lists were delivered to the Institute of Biological and Medical Problems (IMBP) in Moscow for theoretical studies. The result of these theoretical investigations led to basic recommendations for material selection. As a second step samples of critical materials were passed to IMBP for texicological examinations. A third step provided a texicological security clearance of the technological units (TM´s) by performing outgassing tests in Moscow following special methods. As a result of theses examinations the confirmed the acceptance of the units for their use on the space station MIR. This pre-outgassing process was carried out in a hermetically sealed thermo-vacuum cabin at a temperature of +40°C and vacuum conditions of 450 mm Hg (mercury column) for a period of 36 hours.

Furthermore, all instruments used in medical experiments had to undergo a qualification procedure concerning medical applicability. A test person had to perform the whole experiment using the technological experiment hardware under control of Austrian and Soviet medical and technical experts.

Apart from the mentioned main acceptance and qualification tests the central computer system DATAMIR hat to pass data transmission tests in combination with the Soviet telemetry systems “BITS” and “STRELA”, complex tests providing the compatibility of the computer system with the connected instruments and detailed software tests. DATAMIR and the instrument MOTOMIR were tested in an electrically equivalent space station model to confirm electrical compatibility with the systems of the station. All instruments had to undergo a final control procedure in Baikonur before they were integrated in the “Progress M-9” cargo transporter.

Notwithstanding the enourmus pressure of time for the completion of the hardware of the first Austrian-Soviet manned space flight and the partly delays at the developement and building of the equipments as well as the hardware checks, all equipments were qualified in time, brought to the Soviet Union and then to the space station MIR. After the successful test run of the central computer system DATAMIR, which had allready been performed by the previous crew on board, the system worked perfect during used for the scientific experiments during the mission. All equipements worked accurate during the complete mission. The most of them remained afterwards on board and were used in the scope of Russian programs (for the projects AUSTROMIR-E and Med-F, as well as for the Russian longterm flight “RLF”) and for the ESA-missions EUROMIR-94 and -95. Some of them even remained on board up to the controlled reentry of the space station MIR 2001 in use.