The orbital station MIR, in the strict sense the basic block MIR (= Peace), was launched with a Proton rocket on the 20 February 1986. Later further modules were launched and coupled at the space station MIR. These modules were until the AUSTROMIR project 1991 the module Quant (Kvant), Quant-2 (Kvant-2) and Kristall. 1995 the scientific module Spektr and the docking module for the American Space Shuttle and 1996 the module Priroda were coupled onto the MIR. In this constellation the orbital complex reached its final expansion. 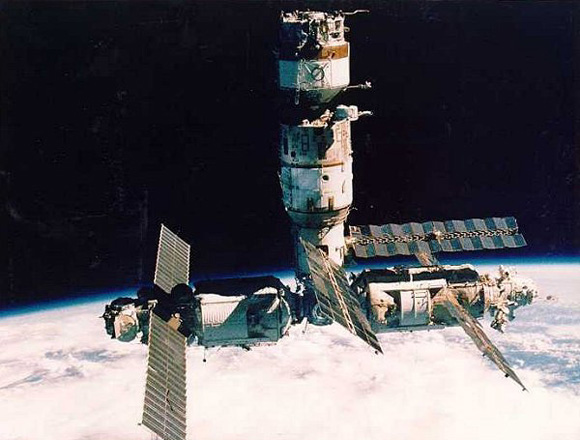 Photo of the orbital complex MIR in its configuration during the AUSTROMIR-91 mission, with the basis block (center), the modules Quant (top), Quant-2 (right-bottom) and Kristall (left-bottom). Photo: Archive 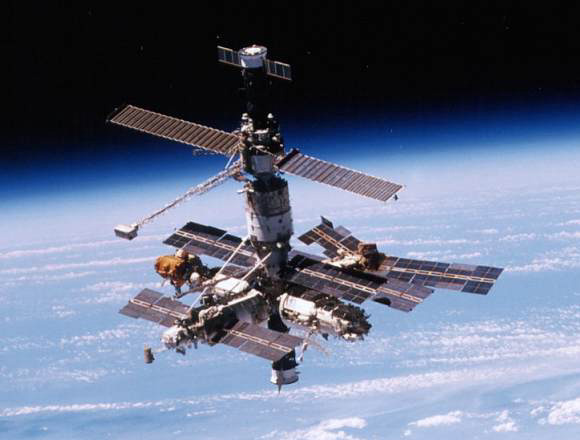 Photo of the orbital complex MIR in its final expansion with all modules. Photo: Archive

The space station MIR was the core of the orbital complex: it assuered not only suitable conditions for working and habitation for the crew, but also coeval the following features: operation control of the orbital complex, the power supply, transmission of telemetry-data from the scientific experiments to earth and some other features. The basis module had six docking-airlocks, whereof two (the axial) airlocks served for docking of the spaceships and scientific modules. The various scientific modules could be operated also from the axial docking-airlock ( at the side of the engine section).

The ground module included four sections: the transit section, the work section, the interspace and the engine section.

The transit section (airlock) had a diameter of 2.2 m and a total length of 2.84 m. It enfolded five docking-airlocks, one for docking of a spaceship or a scientific module and the four others for the adaption of scientific modules. The space ship crew arrived through the hatch with a diameter of 800 mm into the transit section and from there into the scientific module. On the outside of the airlock the rendezvous-antennae, the board headlights, the TV-cameras, the docking target, the port for the admission of the manipulator-arm, the hand rails and other equipment was fixed.

The working section comprised of two round rooms (a frontal room beside the transit section and a rear one beside the interspace) and two conic-cylindric areas. The maximum diameter of the working section was 4.2 m, its length 7.67 m (from the joining with the engine section). The main equipment of the basic module was placed in the working section; this were the command positions of the space station, the crews working places and the areas where the Cosmonauts attended their body training, were eating and aboded. Spacial rest rooms and sanitation areas for the crew where intended, too.

The working section allotted more than 13 portholes with a diameter from 80 to 426 mm for visual observations and for the installation of scientific instruments.

The radiators for the temperature control system and the automatic arrangeable solar cells, optical sensors and miscellaneous equipements were muonted on the outside of the working section.

The interspace inside the engine section had the form of a cylinder with a length of 1.67 m (including the docking mechanism) and a diameter of 2 m.

The engine section was a cylindric unit with a length of 2.26 m and a diameter of 4.15 m. It enfolded the propulsion system, the engines for the maneuver and the attitude control, the rendezvous-antennae, the board headlights, the optical sensors for the docking target, an antennae for radio transmission, the relay satellite and other equipment.

The scientific modules were special space vehicles for the transport of scientific equipment and the for the clean operation necessary systems.

The selection of the scientific equipment, the construction and the on-board systems of these modules was aimed on the respective scuentific targets. But some systems were identical in all modules. This was true for the motional-control system, that ensured the approach of the modules at the space station, the active docking mechanism and the power supply systems.

The first out of a series of specialized scientific modules – the astrophysical module “Quant” – was docked on 12 April 1987 on the basic block. “Quant” was equipped with astrophysical equipment, with were developed from organizations from a series of countries: for example the telescope “Pulsar Kh-1” (former UdSSR), the UV-telescope “Glazar” (former UdSSR), the telescope-spectrometer “Phoswich” (Germany), the telescope with dot mask TTM (Netherlands), the spectrometer “Siren-2” (ESA).

The scientific module “Quant-2” for additional equipment was a specialized space apparat, which was sheduled as additional scientific equipment of the orbital complex “MIR” (about 7 tons) and for the accomplishment of different scientific researches and experiments in the orbit. On board of the module were shower- and washer-equipment, cameras for multi-spectral photos – (MKF-6MA), a biological complex for the development of a procedure of poultry farming in weightlessness (“Inkubator-2”). Also it abstaired a mechanism for autonomous locomotion of the cosmonauts in free space. On an automatic stabilized platform, which approved the autonomous adjustment and chase of the observated object, was a scientific video-spectral equipment, which was on board for research for the first time. The platform could be remote-controlled.

The technological module “Kristall” was used for the realization of scientific and procedural tests and for the docking and function of the complex “MIR” with the orbital spaceship “Buran”, which could be utilized several times. “Buran” never docked at the “MIR”, because this project was discontinued because of lack of money after the collapse of the UdSSR. It was also scheduled to start with this module in test measures the industrial production of semiconducting materials of high-quality for the microelectronics. The target of this works was the search for optimal parameters of procedural processes, with which these materials could be attained, which compared to on earth usual methods dispose on more advanced variables, or to find materials, which don`t know any analogies.

Up to September 1991 the three specialized modules (“Quant”, “Quant-2”, and “Kristall”) were docked on the basis block. The total mass of the complex with two transport spaceships was about 90 tons.

On 23 March 2001, after more than 15 years in space, the 137 tons heavy orbital complex MIR was brought to a controlled crash with three brake-manoeuvres, the last occured between 6:00 and 6:30 o´clock CET, at 6:57 o´clock CET. The biggest part died down and broke apart. Splits fell as planned into the Pazific. Inits more than 15 years lasting history the MIR orbited the earth for 86.325 times.

Parameter of the earth orbit

Atmosphere in the pressurized cabines 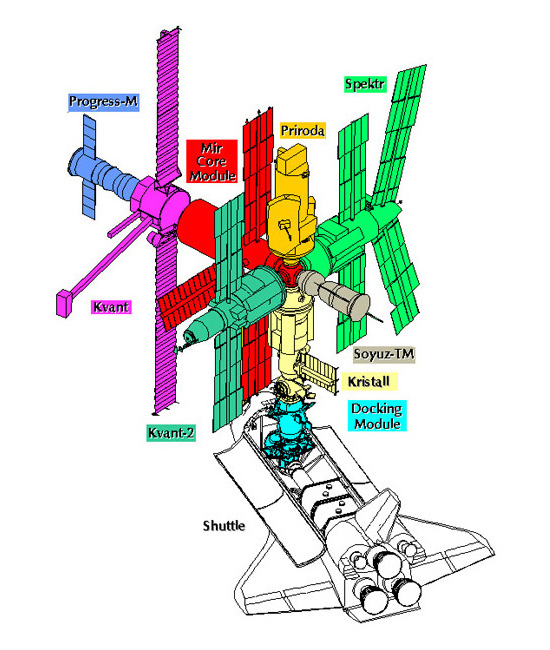 Chart of the obital complex MIR in its final expansion with all modules and the American Space Shuttle. Chart: NASA-drawing from the Office of Spaceflight/Jesco 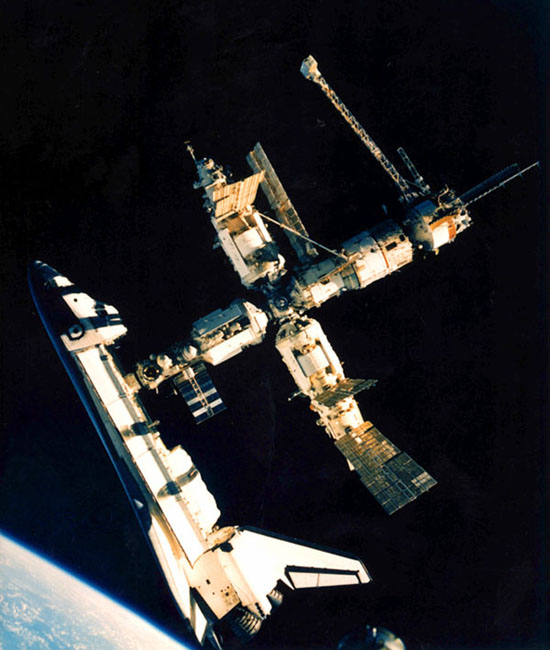 The docked Space Shuttle Atlantis and the space station MIR during the STS-71-mission. Photo: NASA