Remote sensing concerns with the methods of terrestrial observation from aeroplanes and spacecraft. Thereby photographic special-purpose cameras or electronic sensor systems are appointed, which record the by the earth reflected contingents of the electromagnetic radiation. As a result of this specific reflection capacities – different spectral distribution and intensity, which can be identified in terms of color- and brightness variations in the remote sensing photos – the objects can be identified and assessed on the earth’s surface. Remote sensing is one of the most importantinstruments to monitor the environment: beginning with forest damage diagnosis to prognosis of crop yield or to detect marine pollution.

The core responsibility of remote sensing is the applied research, the analysisation and processing of photos and digital acquiration of data. Only a circlet of experts from the leading space flight nations was concerned With the development and the construction of the expensive shoot systems.

A great interest for theory and practice in remote sensing are radio metric differences between the differnt shooting methods. Atmospherical disorders are a very important factor. Inside the different air films light beams are gritted through the influence of water vapour and small aerosol particles (natural or artificial origin) and so don`t reach the sensors in the space station (and respectively the camera on board). Moreover the incident sunrays are dispearesed before they can be reflected by the ground. These parts of the rays illuminate partly the objectives on the ground as (blue) sky radiation and overlay otherwise as scattered light the from earth back comming rays.

Different effects cause that without the knowledge of the actual atmospheric circumstance,there can`t be concluded from the remote sensing pictures directly to the radiometric characteristic of the ground. There are mathematical modells to describe and simulate the complex processes in the athmosphere. They consist of theoretical-physical formulas with through measurements or empirical ways won parameters. The data from the experiment FEM were expected to give new information for the testing and advancement of the up to this time used athmospheric modells. So there comes up the possibility to eleminate the athmospherical influences out of the remote sensing data and to advance additional significance.

During the AUSTROMIR 91-mission there was the first opportunity to adopt the remote sensing sensors of the MIR aimed to the Austrian territory. So there could in Austria coeval be made comparing measurements to the pictures and data taken on board. So there was the possibility to make a coherence on the one hand between the from the station measured data and the actually conditions on the other hand, and additional from an airplane measured remote sensing data.

For the first pictures for the project FEM the picture system PRIRODA-5 was used instead of the multi-spectral camera MKF-6MA. The pictures, which covered 60% of the federal territory stereoscopic, showed an excellent detail sharpness and had a great documentary value. A part of the pictures is stored in form of original-color negatives for cartographic projects: city maps of Bratislava or Vienna and surrounding and a local map of the national park Hohe Tauern. 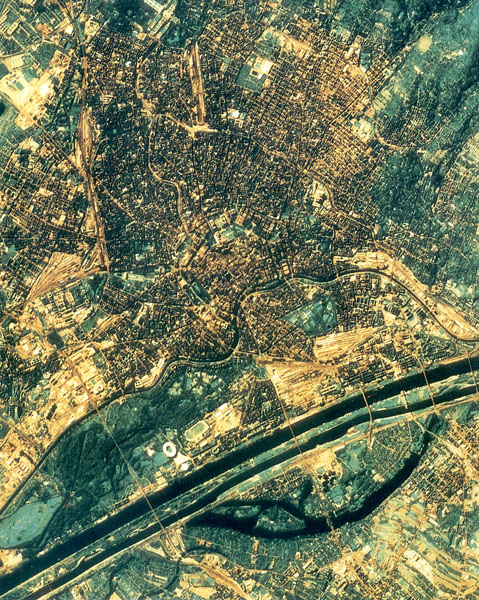 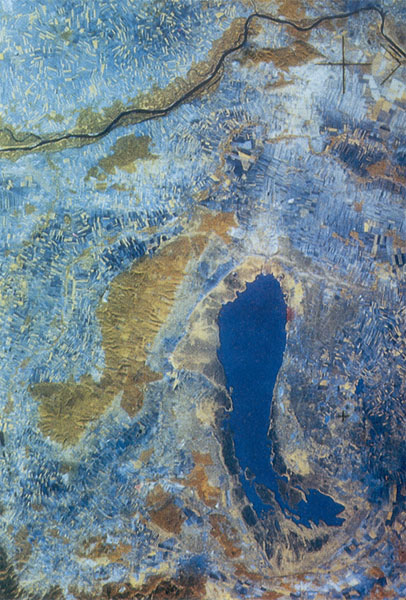 The highest acceptation had those pictures, which covered Austria complete. Even if there were partial interferences in form of clouds and fog fields, was the quality in general notable. The perspective was relative big, so the pictures were digitized with a resolution of 50 m x 50 m and was for the production of a printable map geometrical straightened.

The main interest for the further development of the radio metric research, which are important for the standardization of remote sensing picture datas considering atmospheric effects, was the qualitative comparing from at different times taken remote sensing pictures, to get the analysis from the combination of data from the different sensors and from the from different perspectives recorded data.

For FEM were quasi simultaneous measure data on earth, in air and from the space station MIR collected. So earth probational faces could be considered, which weren`t definitive identifyable on all pictures. The aerial views served as a link. On 5 October and on 7 October partially the same areas were overflown, so this was the first chance to compare pictures from identical vegetation faces from different perspectives or rather different positions of the sun. Helped by the additional available measure data a up to this time only for isochronal taken pictures used method could be appointed. Through the involvement of a curt an hour later recorded scene of the same area with the satellite LANDSAT very valuable cognitions on significance of different resolutions for the detection and the classification of different objects could be won.

The radar pictures are a very new and auspicious part of remote sensing, which were only heavy to compare with conventional pictures. They contained up to this time unseizable informationen, so a combination of the different sensor systems is aimed. Assumption for this is the geometric equalization of the data.

Basically ist to note, that a lot of new information about the geometrical and physical basics of the remote sensing were collected. The presented material will furthermore be used for scientific studies. The pictures for FEM show the main parts of the federal territory at the same time with a high resolution, so that they have a high documentary value. Combined with the presented reference measurements they give an excellent basis for comparison for monitoring and documentation of the environmental state in Austria.

Direct interested institutions on the utilization of the experiment results

In context of the experiment FEM the following Soviet equipments were used. Those were already as standard equipment on the space station MIR:

The multi-spectral camera MKF-6MA, which was used in the context of the remote sensing experiment FEM, was built by the firm Carl Zeiss in Jena. The camera was installed in the module QUANT-2 and concentrated vertical to earth’s surface. It had 6 lenses Pinotar 4/125 mm, each of those exposed a negative dimensioned 55 x 81 mm2. All 6 units were activated simultaneously and pictured the same sector of the earth’s surface. By upstreamed filters a differentiation of the different spectral areas between the wave lengths 480 nm (=blue) and 840 nm (=short wavy infrared).

The spectrometer MKS-M2, used for the experiment FEM, was mounted outside of QUANT-2 on a controllable platform ASP-G-M. The platform was controlled from the ground by a parallel justified TV-camera, so that the spectrometer persisted justified on one area during the complete overflight). The equipment registered the reflected radiation, based on an area of 3 x 3 km2 (13 channels) alternatively 0.7 x 7 km2 (6 channels) on the ground. All 19 spectral channels lay between) 415 and 1030 nm and supplied 30 times per second each a measurement. These were transmitted by telemetry to earth.

The spectrometer PHASA, which was also used in the context of the experiment FEM, was developed by the Institute of Astrophysics and Physics of the Atmosphere of the Estonian Akademy of Science. It also was mounted on the outside of QUANT-2 and was vertical justified. This equipment measured in intervalls of 1/10 seconds the infrared radiation of a 1 x 1 km2 area on earth direct under the flight path of the station. Thereby a radiation profile in 8 channels between 445 and 2190 nm wave lengths was made. The data recording occured through the ground control station.